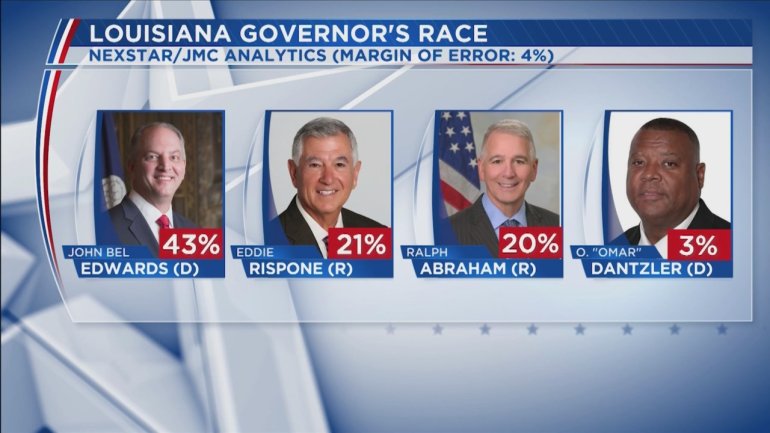 “Right now, the state of Louisiana is in a mess,” Dantzler said. “I strongly believe that the Democratic Party should get out and vote for me and support me, if they want changes.”

While polls show Edwards dwarfing Dantzler, political pollster John Couvillon says the Democratic challenger from Hammond could yield some influence. The 3 percent of polled voters — plus the 4 percent margin of error — could equal the difference between the governor winning the 50 percent needed to avoid a Nov. 16 runoff and stretching the governor’s race five more weeks.

“It’s more likely there will be a runoff than not,” Couvillon said.

Dantzler, meanwhile, maintains he is more than just a downballot protest vote.

“We’re still in this race until Saturday comes, because it could turn out to be a big difference,” he said, downplaying concerns of limited funds. “Jesus didn’t have $5 million, but look what he did. A lower person came as a servant and turned the world upside down, you see?”

Edwards’ campaign aides maintain the governor still has a chance of winning a second term Saturday — with no two-candidate runoff needed.

“Despite this pollster’s history of underrating Gov. Edwards by 5 to 10 percent, this poll shows Gov. Edwards in an incredibly strong position in the final week of the election,” campaign spokesman Eric Holl told BRProud.com in a statement Wednesday. “Gov. Edwards has gained from the previous Nexstar poll, is within reach of winning on October 12th, and is leading his opponents by wide margins.”

Thirty-three Republican legislators sent a letter to the governor saying in part, "With access to vaccinations on the rise, hospitalizations on the decline, and a variety of better treatment options, now is time to end the mandates."

NEW ORLEANS - It takes a whole lot of work.

Got debt? Then you may be in for some unwelcome tax surprises

No fans from abroad for postponed Tokyo Olympics, report says