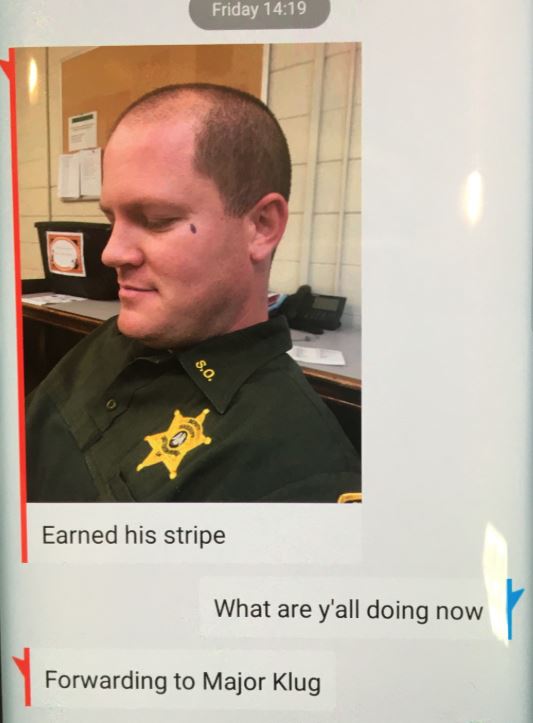 “The tear drop on his face, let’s not mix anything, we know that that mean” said Collins.

The East Baton Rouge Sheriff’s Office confirmed, a picture of former deputy James Hammett was sent out via text.

In a statement, EBRSO said, a second deputy, Kalya Clark took the photo saying, “the picture and text was in reference to Hammett’s sadness at doing time on administrative duty.”

“First and foremost, let’s start with the lack of sensitivity.”

Two months to this day, on September 15, Hammett was placed on leave after shooting and killing 54-year-old Melvin Watkins. The Louisiana State Police ruled that shooting, justified.

“It’s something that we cannot tolerate in this town form public servants we have to do a better job to ensure these people never where badges and never wear uniforms.”

Casey Hicks with the Sheriff’s Office said, following the picture being circulated, an investigation was scheduled to be launched. She said, when the deputies were notified of the investigation, they resigned.

“It was quite cowardly that he resigned before he could face the music.”

The attached picture is of a text message received by Uniform Patrol Captain Jared Ruiz.

It came from Deputy Kayla Clark’s personal cell phone, on the night that she was working light duty on shift with the pictured deputy, James Hammett (was also on administrative duty.)

In an abundance of caution Colonel White notified Internal Affairs to investigate to determine if any policy violations occurred.

Colonel White instructed Major Klug to counsel both involved parties and make them aware that there would be an investigation.

Major Klug stated that during his verbal counsel, the deputy that sent the text stated that she was trying to cheer up the other deputy because he was sad that he was not allowed on the road at this time and was on administrative duty.

She stated the picture and text was in reference to his sadness at “doing time” on administrative duty rather than working on patrol.

The deputy pictured said that he felt that she was being silly in an effort to cheer him up. Major Klug notified both that an internal affairs investigation would be conducted.

The next week, both Clark and Hammett put in their voluntary resignations.

According to the Jefferson Parish Sheriff's Office, 66-year-old Evelyn Miller has been arrested.

Just before 5:00 pm, Miller was arrested by the Washington Parish Sheriff’s Office at a hotel in Bogalusa. Adreana Miller was found during the arrest, and was unharmed. Evelyn Miller will be extradited to Jefferson Parish.

The Louisiana State Police on behalf of the Jefferson Parish Sheriff’s Office have issued a Level II Child Endangerment Alert.

The Louisiana State Police on behalf of the Jefferson Parish Sheriff’s Office have issued a Level II Child Endangerment Alert.

NEW ORLEANS- The Country Day Cajuns and Riverside Rebels went toe-to-toe Friday night in the District 9 1-A semi-final round.

The Rebels jumped out to a quick 36-22 lead in the first half, highlighted largely in part by a 16 point outburst from Gage Larvadain.

Michael Avenatti is convicted of trying to extort Nike

Showers possible in the afternoon Precip: 40%