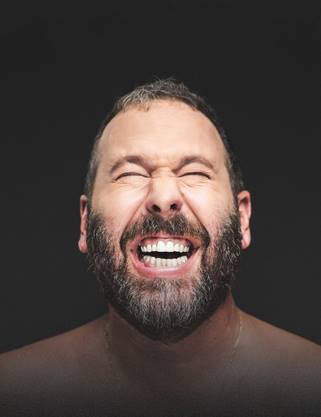 Bert Kreischer is an American stand-up comedian, actor, writer and host who performs to sellout crowds across the country.

His standup specials “Secret Time” and “The Machine” are currently streaming globally on Netflix.

Described as having a “rare and incredible talent” (Interrobang), Bert has evolved from being named Rolling Stone’s 1997 “Number One Partier in the Nation” to one of the top names in comedy.

Between his two previous stand-up specials, “The Machine” on Showtime (2016) and “Comfortably Dumb” on Comedy Central (2009), his two podcasts: “Bertcast,” and “Open Tabs,” his YouTube cooking show: “Something’s Burning,” his book Life of the Party: Stories of a Perpetual Man-Child (2014), Bert has succeeded in finding the elusive blend of “being a cringe comedian with real insight” (Interrobang).

Lauded as one of the best storytellers of his generation, Bert seamlessly and sincerely shares anecdotes about his family and fatherhood while showing his ability to prove “that there’s a way to take his [party-boy] antics into middle-age,” (Forbes).

His infamous story about robbing a train with the Russian Mafia was recently optioned by Legendary (the studio behind The Hangover Series, Jurassic World, and Straight Outta Compton) to be turned into a movie.

After the successful debut of The Body Shots World Tour in 2019, where he quickly sold out theaters and added shows in almost every market, Bert is launching a brand new tour in 2020, “The Berty Boy Tour,” where he will do shows in even larger venues across the country.

Tickets for Bert Kreischer will go on sale Friday, November 8th at 10 A.M. at the Mahalia Jackson Theatre Box Office, ticketmaster.com or by calling 800-982-2787.

NEW ORLEANS - On February 24 and 25, the NOPD arrested four male suspects and seized a substantial amount of weapons and illegal drugs.

ST. JAMES PARISH - Upon entering a guilty plea, 23-year-old Kendrick Armant, of Vacherie, was sentenced to 10 years with the Louisiana Department of Corrections. Armant pled guilty to possession of a firearm by a convicted felon, as the result of a plea agreement with prosecutors following a 2019 shooting investigation.

On November 16, 2019, detectives with the St. James Parish Sheriff’s Office responded to an area hospital in reference to a male subject identified as Kendrick Armant arriving at the location with a gunshot wound to the forearm.

COVINGTON, LA -- The Saint Tammany Parish Sheriff's Office is hoping to capitalize on the growing network of doorbell and other security cameras in the parish. The department is partnering with the Neighbors by Ring app to help fight crime and spread information in the parish's neighborhoods.

The Neighbors by Ring app is a network of security camera owners. People who belong to the program can send information and images from their cameras to their neighbors.