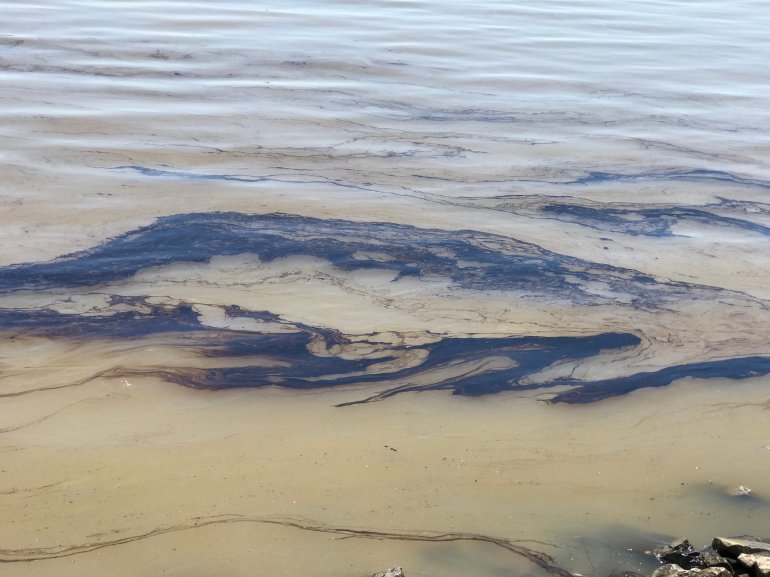 UPDATE – During a press conference Thursday afternoon, chief of response Zachary Ford, informed the media that 4,200 gallons of oil spilled around 10 o’clock this morning.

Since then clean up crews have been working non-stop to collect the oil safely and are monitoring the air quality to ensure the public is safe, especially during French Quarter Fest weekend, where thousands of people will be enjoying music along the riverfront.

Watch the full update below.

NEW ORLEANS – Traffic on the Mississippi River has been interrupted after a vessel collided with a structure at the Nashville Avenue Wharf complex.

Oil has been reported in the river from mile marker 91 through marker 101, according to the US Coast Guard.

Dark swirls of oil can be seen flowing downriver, prompting a shutdown of river traffic that has left the Steamboat Natchez and the Creole Queen idling dockside.

The Regional Transit Authority also shut down the Algiers Ferry just after noon as the oil spill spread down the river.

The source of the oil spill has been identified as a vessel at the wharf that began leaking deisel fuel around 10:30 a.m., according to the Coast Guard.

The leak has since been plugged, and the cause of the leak is under investigation.

No injuries have been reported.

The Louisiana Oil Spill Coordinators Office, Louisiana Department of Environmental Quality, and OMI Environmental Standards have all responded to the leak in addition to Coast Guard air and water crews based in New Orleans.

NEW ORLEANS -- The New Orleans Police Department is investigating a shooting that happened overnight on the 4900 block of Wright Road.

Police say a toddler was hit and taken to a local hospital; his condition is unknown at the time.

The New Orleans Saints continue their march toward Super Bowl LV and the WGNO Sports team take a deep dive into the third meeting of the season between bitter NFC South rivals, however this time it's to decide which team stays in the hunt for the Lombardi Trophy.

It's Brees vs Brady III as the New Orleans Saints host the Tampa Bay Buccaneers in a NFL Divisional Round matchup in the Superdome on Sunday.

In this episode, the WGNO Sports team talks the third meeting of the season between Drew Brees and Tom Brady. The Saints pop the Bucs twice, but can they do it in triplicate? They certainly have the attention of the opposing quarterback.

Johnson & Johnson one-dose COVID-19 vaccine may be on horizon

Risky driving: US traffic deaths up despite virus lockdowns

Home in St. Louis murder case lists for nearly $360K; buyers line up for a look

Brazen afternoon shooting prompts restaurant to give back on MLK Day

Warning: Stennis rocket test on Saturday will be LOUD.