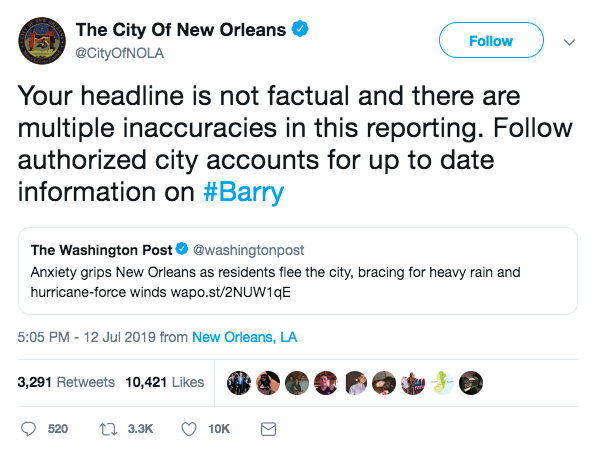 NEW ORLEANS – The City of New Orleans has been fighting back against inaccurate Tropical Storm Barry media coverage on Twitter.

After spotting a tweet by the Washington Post advertising an article titled “Anxiety grips New Orleans as residents flee the city, bracing for heavy rain and hurricane-force winds,” the administrator of @CityOfNOLA leapt into action.

“Your headline is not factual and there are multiple inaccuracies in this reporting,” the City tweeted at the Washington Post. “Follow authorized city accounts for up to date information on #Barry.”

When another Twitter user tweeted out a picture meant to show widespread flooding in Orleans Parish, the city’s account reacted similarly.

“This video is from a different rain event days ago,” that tweet read. “This does not accurately depict the current conditions in New Orleans.”

The social media salvos have been met with waves of support by New Orleans residents and fans of accurate reporting alike.

A look inside the Grammy gift bag

Want to know how to treat yourself like a celebrity? We’ve got the rundown of gifts for a Grammy-level self-pampering session.

Themed food and drinks are a surefire way to make your party stand out, and looking at past Grammy nominees is a great way to get inspiration.

Love the Grammys? We have everything you’ll need …

With Grammy night around the corner, here are some fun ways to embrace the theme, boost your entertainment and make your guests feel a part of the festivities.

Clowney, Griffen lead No. 4 Alabama to hold off LSU …

From La. to LA | Cantrell participates in summit …

Clowney, Griffen lead No. 4 Alabama to hold off LSU …

Crawfish prices back to normal, just in time for …