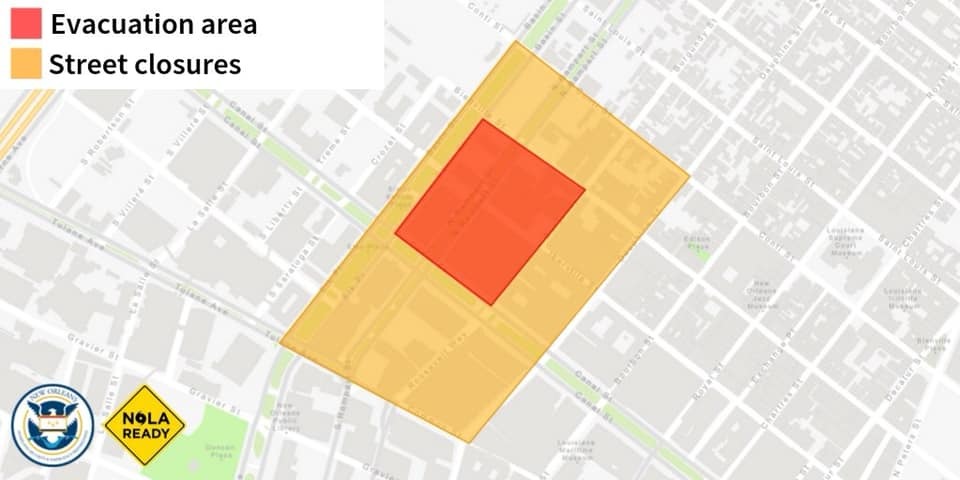 NEW ORLEANS — City of New Orleans public safety agencies are responding to the collapse of a portion of the Hard Rock Hotel that is currently under construction at the corner of Canal and Rampart streets in the downtown area of the city.

The New Orleans Orleans Office of Homeland Security and Emergency Preparedness and the New Orleans Police Department also responded to the scene, along with senior leadership from the Mayor’s office, including Chief Administrative Officer Gilbert Montaño and Deputy CAO for Infrastructure Ramsey Green.

At 9:12 A.M. the New Orleans Fire Department received reports of a major collapse of the sixth to eighth floors of the Hard Rock Hotel construction site.

The frame of the building is considered stable but is unsupported, and therefore the situation is considered dangerous and residents are strongly encouraged to avoid the area until further notice.

A mandatory evacuation is being conducted in a “red zone” (see image below) bounded by the Uptown side of Bienville Street, the downtown side of Canal Street and lakeside of Burgundy Street. (The orange area in the image below is closed to traffic.) Residents who are in this area are required to evacuate immediately and listen to public safety officials.

All shows scheduled at the nearby Saenger Theatre have been canceled.

Impacts to service by the New Orleans Regional Transit Authority (RTA) are expected — including the Canal Streetcar to the Mississippi River, the Riverfront Streetcar is out of service, and the Rampart Union Passenger Terminal line is impacted — more details are forthcoming.