As you know, purple is one of the Minnesota Viking’s colors, so that’s why Breaux Mart tweeted this: 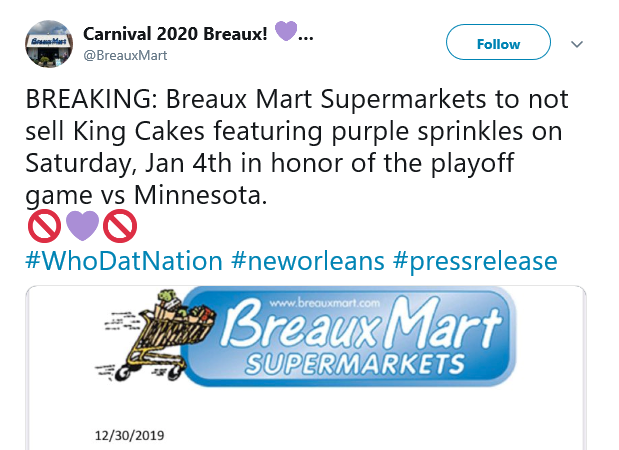 Afterwards, BreauxMart realized they Tweeted the wrong date for the game, but the message is all the same.

Make sure to read the fine print though, BreauxMart won’t be selling king cakes at all this weekend, until Monday which is Twelfth Night, January 6th.

The Saints take on the Vikings on Sunday, Jan. 5, at 12:05 at the Mercedes Benz Superdome.

NEW ORLEANS-- You've heard the saying that the way to someone's heart is through good food, right? Well that is very true right now.

NEW ORLEANS - The NOPD needs help locating a suspect involved in an aggravated battery incident that occurred on March 30.

Thirty-four year old, Keyonita Thomas, got into an argument with the victim after Thomas was asked to move out of the victim's apartment. Thomas allegedly grabbed a blade and swung several times at the victim and caused a deep laceration on the victim's finger.