As always, they brought in huge rap, R&B, indie, and electronic artists including Bassnectar, Sza, Migos, MGMT, Virtual Self & Illenium.

The popular New Orleans music festival also changed up their layout this year, moving around the Power Plant, Wharf and VIP stages to accommodate more guests.

Fest goers had to walk a little more, but I really enjoyed the space when watching acts at the Power Plant stage, and being far back actually made many of the light shows more enjoyable. 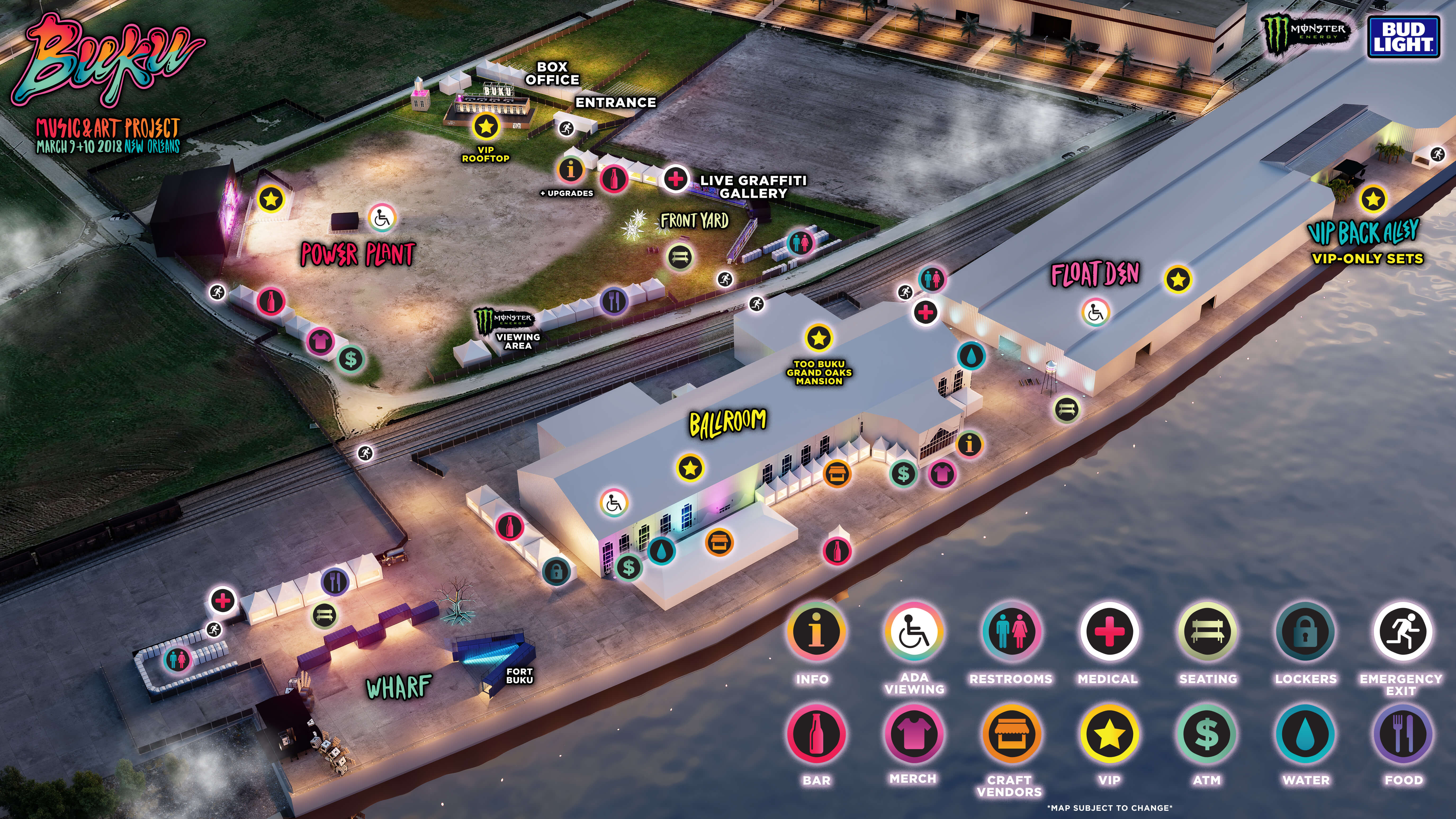 #BUKU2018 pulled out all the stops per usual. I always have loved their stages. You can enjoy a gorgeous sunset backdrop while watching acts on the Power Plant Stage.

You can see clips from MGMT & Illenium, below.

The Float Den is just a visual smorgasboard. Honestly, it's probably one of my favorite stages out of all the music fests I have been too.

It has this amazing intimacy to it since it's in this warehouse space. Plus you have the Mardi Gras World float pieces all around.

The DJs always pull out the wildest, craziest laser and jumbotron stunts to appease the audience. I am never disappointed when I watch an artist at the Float Den.

The Wharf stage had a cool set up this year. This smaller stage has less of the visual flair you see on Power Plant or Float Den, but you're able to get so close to the artist and in the background you can see barges floating down the Mississippi.

You have to at least check out one act here. It's a great break from the madness surrounding the other stages too.

I still can’t believe I was finally able to see this legend. The man himself. @GreenVelvet_ in the flesh. #TOOBUKU 💚🕺 pic.twitter.com/sZwA3eTn1G

So this happens -- there were hiccups! A big one -- headliner Lil Uzi just didn't show up.

Festival season is off to a great start! Third artist to cancel in 2 days. @liluzivert #liluzivert #buku #neworleans

Migos was late. Some other artists pulled out at the last minute too.

Skimask and Dex canceled too! Migos came on 40 mins late and played for 20. young thug cancelled last year too. They should all be hella fined.

There was a 10 minute power outage during the "Virtual self" set.

But, honestly, his set was easily my favorite from the entire festival. DJ Porter Robinson, still bringing down the house despite the technical setback.

Sza had to call it quits early, later tweeting out a photo of her ankle in a splint.

Some BUKU attendants were also freaked out when a small explosion was seen across the river in Chalmette. It ended up being routine testing at the PFB Chalmette Refinery.

And while Gretna and Algiers folks are used to hearing some reverberation, apparently some people were hearing BUKU all the way out in Belle Chase.

Despite those complications, BUKU did really step it up this year. They expanded the layout, had some sick art installations and structures up and the artists that came out did it BIG.

SHREVEPORT, La. (KTAL/KMSS) – A federal grand jury has returned an indictment charging the Claiborne Parish Constable with selling and misbranding illegal supplements online and in stores.

On Wednesday Acting U.S. Attorney Alexander C. Van Hook announced that 72-year-old William Earl Maddox, of Haynesville, has been charged with two counts of mail fraud, three counts of misbranding of a drug with intent to defraud or deceive, and seven counts of wire fraud.

The category four storm was the strongest storm to hit Louisiana in more than 100 years.

HARVEY, La - A fourth grade student at Woodmere Elementary was suspended for handling a BB gun during a virtual classroom session, but a lawyer representing the student's family says the punishment was too harsh.

Nine-year-old Ka Mauri Harrison was in his bedroom taking a Social Studies test virtually on the afternoon of September 11 when the incident occurred, according to attorney Chelsea Brener Cusimano, who represents the Harrison family.

Which is the better mascot: Tiger or Bulldog?

Clyde Edwards-Helaire on settling into NFL

Senior citizens injured after teens fire paintballs at them in California

Which is the better mascot: Tiger or Bulldog?

Clyde Edwards-Helaire on settling into NFL