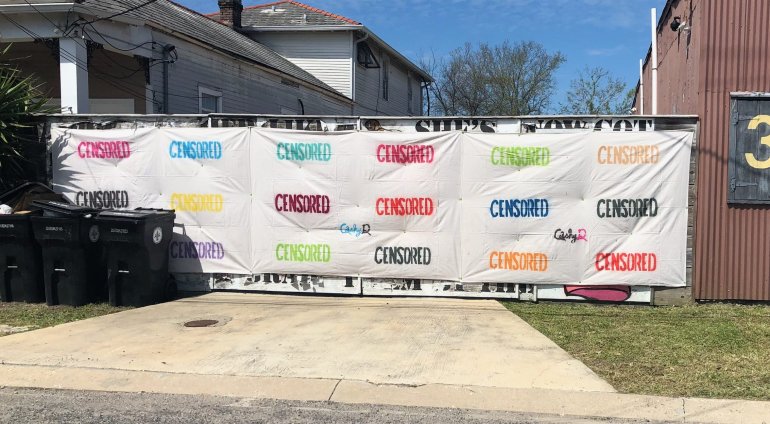 NEW ORLEANS – The ACLU of Louisiana is sticking up for a New Orleans resident city officials have ordered to remove a controversial mural.

The mural depicts a somewhat censored version of an infamous quote of President Trump discussing his interactions with women during a 2005 Access Hollywood segment.

In the mural, vulgar words from the original quote are substituted with cartoon-style pictures including a topless woman and a pink hat popular with participants of last year’s Women’s March in Washington, DC.

Property owner Neal Morris faces a steep fine or jail time after the New Orleans Department of Safety and Permits accused him of a zoning violation because of the mural.

Morris covered the mural with a sheet featuring the word “Censored” in multiple colors after the city’s decision.

City code requires “advance review and approval by the board of murals review prior to issuance of a permit” for all proposed murals, according to the ACLU.

But that advanced permitting process puts city bureaucrats in control of the freedom of expression afforded to private citizens by the First Amendment, according to ACLU of Louisiana interim executive director Jane Johnson.

“This mural is a constitutionally-protected form of free expression – a right guaranteed to every American by the First Amendment,” Johnson said. “Forcing artists and their patrons to get permission from the government, pay exorbitant fees, and navigate an obscure bureaucratic process before they can express themselves on their own property is a totally unnecessary trampling of their First Amendment rights.”

The ACLU today filed a First Amendment lawsuit on Morris’ behalf arguing that the permit process violates the Constitution.

“Over the years I have been happy to give street artists a platform for their work, but the city’s permit process is so complex, so onerous, and so arbitrary that even city officials themselves don’t seem to understand it,” Morris said. “Artists who want to create art on their own property shouldn’t have to wait around while a bunch of government bureaucrats decide whether they think a sketch is aesthetically pleasing. Yes, occasionally we will be confronted with art we find objectionable, but that is preferable to living in a city where bureaucrats decide what we see.”

A spokesman for City Hall said the city is currently reviewing the lawsuit.

The city also sent a link to the Commercial Zoning Ordinance for mural guidelines. The guidelines do state that murals have to be approved before being painted, but the rules do not specify vulgarity or obscenity.