NEW ORLEANS – When the Rolling Stones brought their Voodoo Lounge tour to New Orleans in 1994, a couple of shy 12-year-olds were in the audience, and they were on their first date.

Twenty-five years later, when the Stones returned to New Orleans, the same two people, now close friends, were in attendance.

Jonathan Pretus and Leslie Becker probably enjoyed the show a lot more the second time around, as adolescent nerves had been replaced by decades of friendship.

“Our courtship was short-lived, as it is at 12 years old, but our friendship continues,” Pretus wrote on Facebook. “So when she returned the favor and invited me 25 years later, well, of course.”

Becker, whose mother is an entertainment lawyer who represents Pretus’ band The Breton Sound, scored VIP tickets when the Stones brought their much delayed No Filter to the Mercedes-Benz Superdome on July 15. 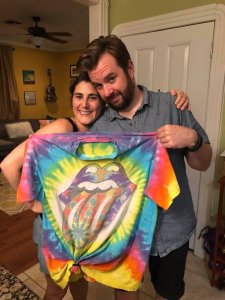 For Becker, inviting Pretus was a no-brainer.

Before that Jazz Fest show was canceled, Becker and Pretus posed together for a picture with a relic from their first date – a Voodoo Lounge concert t-shirt.

“The Rolling Stones may not have played today at Jazz Fest but I am glad I have a friendship that is still gold,” Becker wrote at the time.

After 25 years, these two friends have forged a golden connection through the greatest rock n roll band still out there.

Now in its 50th year, “Greasing of the Poles” has earned its place in Crescent City history as a landmark experience, and is considered by many as the French Quarter’s official kickoff to Mardi Gras weekend.

NEW ORLEANS (AP) — After Gulf of Mexico charter boat captains stayed within federal limits for red snapper, regulators are making permanent a rule that lets them catch more of the fish.

The rule initially was to be just for one year. The change will likely mean that the 2020 charter boat season for red snapper is seven or eight days longer than it otherwise would have been.

Trump rips ‘Parasite’ over historic Oscar wins; ‘Can we get like “Gone With the Wind” back?’