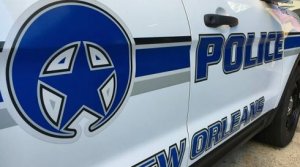 NEW ORLEANS – The NOPD has arrested a teenager for a hit and run crash.

The 14-year-old male was questioned at his home after police were called out to investigate a shooting.

He told the investigators that he had suffered a gunshot graze, from unknown subjects firing at him from a blue Honda Civic.

A little later, officers were called out to a hit-and-run incident involving a similar vehicle that had been reported stolen.

Upon arrival, the detectives determined it was the same vehicle mentioned by the young boy earlier in the day.

Through further investigation, the officers learned that the boy was the driver of the vehicle, and his injury was not from a gunshot, but from the car crash.

The boy was arrested and booked into the Juvenile Justice Center for possession of stolen property, criminal mischief and obstruction of justice.

Anyone with information on this incident is asked to contact NOPD Seventh District detectives at (504) 658-6070.

The department made the announcement this afternoon following its decision in June to spend more than $1 million on the program.