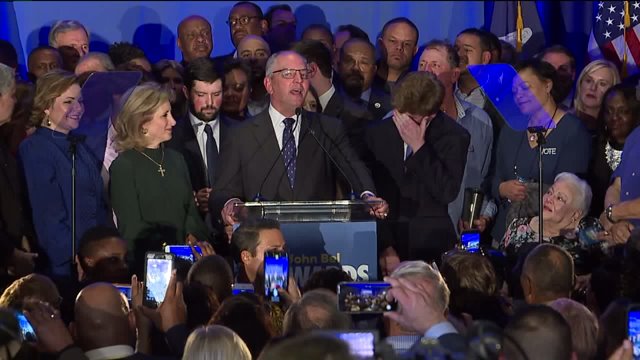 BATON ROUGE, LA – Governor John Bel Edwards has officially been re-elected as Governor for the state of Louisiana.

“It is a great day in Louisiana. You didn’t just vote for me, you voted for 4 more years putting Louisiana first.” said Edwards.

Edwards ended the night with 51% of votes. His opponent, Republican candidate Eddie Rispone, coming in behind with 49%.

Over the last few weeks, both candidates had spent time campaigning across the state of Louisiana ahead of Saturday’s run-off election.

Despite multiple public appearances by President Donald Trump and Vice President Mike Pence, in support of Rispone, it seems the people of Louisiana have made it clear who they want representing them. That person, is Democrat Governor, John Bel Edwards.

“I spoke with Eddie Rispone this evening. I thanked him for putting himself out there for public service. It’s a difficult thing for anyone to do. We both agreed that campaigning is over and that our love for Louisiana now comes first. As for the president, god bless his heart.” said Edwards.

Edwards now remains the only Democratic Governor in the Deep South. Before exited the stage, Edwards thanked his supporters for continuing to put Louisiana first.

AUSTIN (KXAN) -- Ray Benson, the country music icon known from the band Asleep at the Wheel, says he has tested positive for coronavirus, according to a Facebook post.

Oh my goodness! HOW CUTE!

With no one around due to the coronavirus pandemic, animal care staff took African penguins Hubig, Dumpty, and Flippy on a field trip throughout Audubon Aquarium of the Americas.

A new interactive chart of confirmed cases of COVID-19 shows the path of exponential growth and highlights the countries that have beaten the "growth trap."

Henry Reich and Aatish Bhatia, both physicists, worked together to create the graph. Reich created a minutephysics video to explain the data. The data was provided by Johns Hopkins University.