JAPAN – A major earthquake struck Tuesday morning off the coast of Japan, about 70 miles away from Fukushima, the U.S. Geological Survey reported.

The magnitude was initially reported at 7.3, but the USGS later downgraded the strength to 6.9. The earthquake struck around 6 a.m. local time Tuesday (3 p.m. Central time Monday) 23 miles off the coast of Honshu Island at a depth of about 7 miles. The closer to the surface an earthquake occurs, the more like severe structural damage is at the surface. 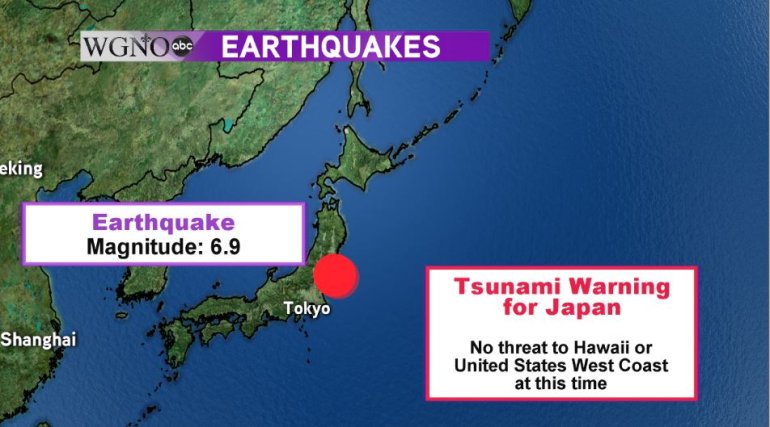 A tsunami warning has been issued along the coast of Japan, according to the National Weather Service. NHK World has a live view here. There is no immediate threat to the U.S. Coastline expected at this time.

It is possible that the tsunami could be between 3 and 10 feet above normal tide levels and residents along the coast are being urged to evacuate accord to the Japan Meteorological Agency as tsunami sirens blare across the coastline.

The country’s public broadcasting station is urging not only those along the coastline but also those inland to move to the other side of the island as a 10 ft wave would cause significant damage farther inland. A 2 ft wave has already been reported on the Pacific Coast of Honshu Island.

This is a developing story; refresh for updates.

BATON ROUGE, La. (KLFY) — The Louisiana Senate this afternoon unanimously confirmed Dr. Cade Brumley as the state superintendent of education. He will officially start in the position on June 8.

“I applaud the Senate for their confirmation of Dr. Brumley today,” said Louisiana Board of Elementary and Secondary Education’s (BESE) President Sandy Holloway. “These are unprecedented times; strong leadership will be important to the success of our short- and long-term work to address unfinished learning due to COVID-19 closures and to ensure that students and schools are positioned for a strong start next year. This will be a huge responsibility, but we have the right leader for it.”

Legislators began a special session Monday night to tackle spending matters. The session will let state House and Senate members catch up, after the novel coronavirus kept them from the State Capitol for weeks this spring.

The park has been closed for two months to help stop the spread of COVID-19.

Governor: Semi driver was confused when he drove into Minneapolis crowd

Tropical Storm Cristobal likely to form in the Gulf of Mexico. Worth closely watching from Texas to Florida.

VIDEO FORECAST — Tropical Storm Cristobal likely to form in the Gulf of Mexico.