NEW ORLEANS (WGNO) – Hurricane Nicole continued to speed past the tiny island of Bermuda this afternoon after a direct hit as a Category 3 hurricane.

The eye of the hurricane passed over Bermuda around 10 a.m. Central time as winds were sustained at 120 mph. The island’s roughly 65,000 inhabitants haven’t seen a hurricane of this magnitude this close to the island since Hurricane 5 back in 1939.

As trees snapped and power was lost, the island saw a brief break from the torrential rain and winds as the eye passed overhead. The British Territory is accustomed to heavy weather and has a sturdy infrastructure, but a hurricane this intense is rare for the island particularly so late in the hurricane season. In fact, Nicole is the first major hurricane to track north of 30°N since Hazel in 1954.

Beyond Bermuda, Nicole is expected to continue to race to the northeast through the open Atlantic slowly losing force as winds retreat to 75 mph by Saturday. Over the course of the weekend, Nicole is expected to lose its tropical characteristics and transition into  a post-tropical cyclone. Even though no longer classified as a hurricane when this happens, Nicole’s maximum sustained winds will be of hurricane strength into next week. 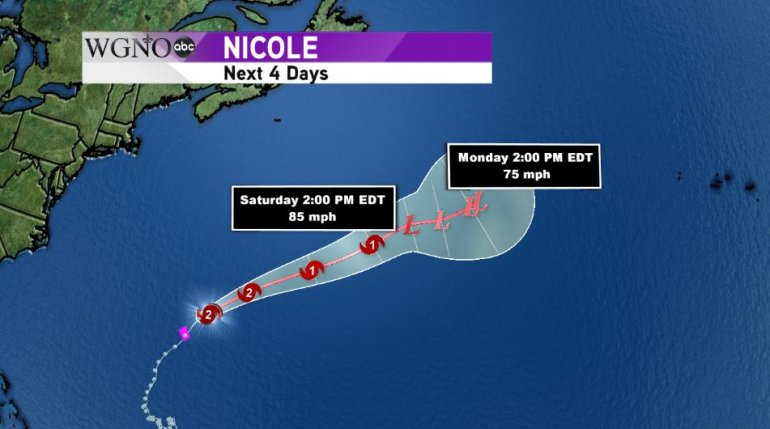 As a whole, the 2016 Atlantic hurricane season has had more days with a major hurricane present than 2012 through 2015 combined.

“I do get a laugh about it. People bring it up a lot because they’ve seen my Instagram video,” said Chad Jones, of Tallmadge.

OURAY COUNTY, Colo. (KDVR) — A man was hospitalized after the vehicle he was driving plunged off of a Colorado mountain pass Thursday morning, authorities said.

The Ouray County Sheriff's Office said Dack Klein, a Colorado Department of Transportation driver, came across a debris field on the Red Mountain Pass and heard the man crying out for help "in what had to have been a grueling and terrifying event."