Friday morning, St. Tammany Parish President Pat Brister declared a state of emergency for the entire parish.  She also encouraged people who live in the flood threatened areas along the rivers to consider leaving their homes.  Brister asked people who opted to leave to do so before dark at which point it would be more dangerous for emergency responders to rescue them.

Covington Mayor Mike Cooper also said that the water level could reach or rise above the level of some bridges along the rivers.  The parish was also receiving help from the National Weather Service, various area fire districts, and the Louisiana DOTD due to the roads affected by the rising water. 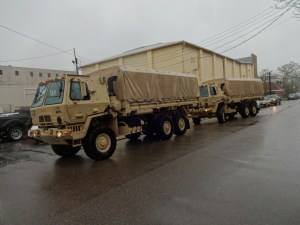 “They have water rescued about 100 people that didn’t realize that they would be in harm’s way,” Brister told reporters Friday afternoon regarding the work of the parish’s sheriff’s office.

Brister said the Louisiana Department of Wildlife and Fisheries was also providing boats and personnel to help with water rescues.

Many of the areas surrounding downtown Covington were flooded Friday afternoon.  Businesses like the  restaurant Del Porto on Boston Street closed for the night.

Parish President Brister urged people who opted not to leave their homes to stay indoors.

Bogue Falaya Park was closed due to high water.  Some of the homes along Blackburn Place also looked more like islands.  Click on the video button below to see more.

Cooper also says that people who live in areas that have flooded previously should also consider leaving.  He is stressing that there may be limited emergency service available for people who find themselves in trouble.

Memphis formally made the selection of the Virginia swing player for New Orleans as part of a previously agreed upon multi-player and multi-pick trade that cannot become official until Aug. 6 under NBA rules.

WASHINGTON (AP) — Attorneys are asking the Biden administration to release from immigration custody a Chinese democracy advocate who could be deported to his homeland to face what they say are false charges — despite the lack of an extradition treaty between the United States and China.

Human rights advocates say this is one of a handful of cases in which China has used the Interpol “red notice” system to try to force the return of fugitives from the United States. Under this system, a member country of the international police consortium can ask other countries to arrest and return fugitives living abroad. It’s not clear how often, if ever, this tactic has resulted in the U.S. turning over detainees to Chinese authorities.

If you've ever eaten a sno-ball too fast and immediately felt a stabbing pain in your head, that's brain freeze! But, did you know it’s not actually affecting your brain?

Hottest weekend of the year on its way!

‘He was dead’: Arkansas man recovers after 20 minutes without heartbeat, oxygen

LSU’s Cam Thomas selected in 1st Round of NBA Draft

Extreme heat in the forecast for this weekend!

One teen dead, another arrested following shooting at Kenner home

Get the Skinny: The ‘Costco Diet’

Hottest weekend of the year on its way!

‘He was dead’: Arkansas man recovers after 20 minutes without heartbeat, oxygen