This is an archived article and the information in the article may be outdated. Please look at the time stamp on the story to see when it was last updated.
NEW ORLEANS (WGNO) – WGNO’s weekend anchor and News With A Twist reporter Jacqueline Mazur is a self proclaimed Halloween enthusiast and headed over to the Pitot House in Bayou St. John to check out this year’s 19th Century Mourning and Burial Customs Fall 2016 Series. The tour began outside the Pitot House, where executive director of the Louisiana Landmarks Society, Carol Gniady, joined in on the tour. Save Our Cemeteries guide Emma Gross began the afternoon discussing mourning traditions that date back hundreds of years. Did you know people wore dark clothing to mourn the deceased so they would not come back and haunt the living? Gross informed the crowd that women carried the brunt of mourning. Their clothing was “elaborate and cumbersome,” and a woman’s dress was suited to her specific stage of mourning: Men wore a black or brown suit, an arm band to signify they were in mourning and an ornament in their hat. Gross says the men had it much easier and were allowed to return to work rather quickly, whereas women, depending on who was ruling at the time, were known to mourn for years. Gross also mentioned various superstitions associated with death and dying: After a brief walk from the Pitot House to St. Louis Cemetery #3 on Esplanade, the tour continued among the dead. Our first stop was a memorial honoring St. Louis IX, the patron saint of all Louis kings. He’s also the patron saint of monarchs, distillers, construction workers, hair dressers, and large families. We visited several grave sites along the tour and recommend you check it out yourself for the full rundown. Another site to note is the Skelly Tomb. Gross says this tomb is obviously more modern in design and it’s been said the woman who owns this plot wants to be buried with her animals, not her family members. The group also visited the grave site of two women entrepreneurs, two sisters who died two months from each other. Their home was in the French Quarter and now houses The Court of Two Sisters restaurant. Gross says the number one reason New Orleans has above ground burials is due to cultural heritage. The second reason, as I’m sure you can guess, is because of the high water table. The cemetery tour ended when Gross reminded the group that people die twice. First, when life leaves your body and second, when you are forgotten. After walking back to the Pitot House, refreshments were served including a Funeral Pie. It’s a traditional pie made with raisins and sugar and often taken to the family of those grieving over a passing. Click here for the recipe. 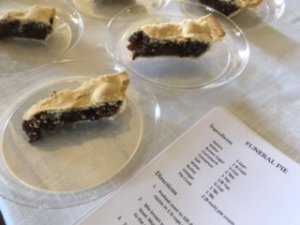 The tour then continued with a brief overview of the history of the Pitot House with docent Jamie Barker, followed by a tour of the home. The home was ‘dressed’ as if in mourning and featured rooms with black cloth covering all mirrors, period piece mourning attire, in addition to mourning mementos. The entire tour lasted roughly two and a half hours and costs $30/person. Comfortable clothing, walking shoes and a hat or umbrella are recommended. The next tour is Friday, October 14th at 1:30. Click here to purchase tickets.
29.975471-90.08519

The Surf & Sand pet policy does prefer pets 80 lbs or less, but special arrangements can be made for larger pet guests. Pets must remain on a leash and in pet designated areas. The pet-friendly hotel rooms will have an added pet fee of $40 per night or $100 per week. There is a grassy pet walking area along the east side of the hotel, and pets are welcome to enjoy the hotels private beach at the rear of the building on Little Sabine bay.

Time for some self-love. Singles awareness on Valentine’s Day.

Premium skin care products at an affordable price, that was the goal of DIME Beauty. Owners Baylee and Ryan Relf put everything they had into creating beauty products for all budgets. Baylee, a licensed aesthetician and skin care advocate, learned that the secret to achieving healthy skin was the use of quality products. Ryan, a beauty product development specialist, discovered that high quality skin care products were marked up so high, it made them difficult to afford.

What you really want on Valentine’s Day

Calling all last minute shoppers! Valentine's Day is fast approaching so we put together a list of gifts that will have your Valentine swooning for weeks to come. All of the following gifts are available online, and express shipping is never a bad idea.

Are you a traditional gifter? If so, the Roses & Chocolates Gift Box from Romancehelpers is exactly what you're looking for. Bring some poetic romance in your life and combine two classic Valentine's Day gifts in one with this beautiful preserved rose Valentine's Day Gift Box. Seventeen real preserved red roses will bloom in the box for at least two years creating one of the best lasting romantic memories. Inside the beautiful satin box, find 24 Ferrero Rocher hazelnut chocolates, as well as a romantic quote by William Shakespeare.

Cruise stranded by virus fears ends with roses in Cambodia