As we wrap up the month of November, we also wrap up the Atlantic Hurricane Season and it has been quite the active season!

2017 will go down as being tied for the fifth most active hurricane season in the Atlantic since records began being kept in 1851 and the most active season since 2012.

This year, not only did we have 10 hurricanes, but they occurred sequentially, tying the record for greatest number of hurricanes in a row. Hurricanes occurred from Franklin to Ophelia. Overall we had 17 named storms, 6 tropical storms and 11 hurricanes, 6 of which were major hurricanes: Harvey, Irma, Jose, Lee, Maria, Ophelia.

For our viewing area, three named storms affected Louisiana and Southern Mississippi: Cindy, Harvey and Nate. Cindy swept ashore as a tropical storm near Cameron, Louisiana and was the first tropical system to make landfall in the state since Isaac in 2012. 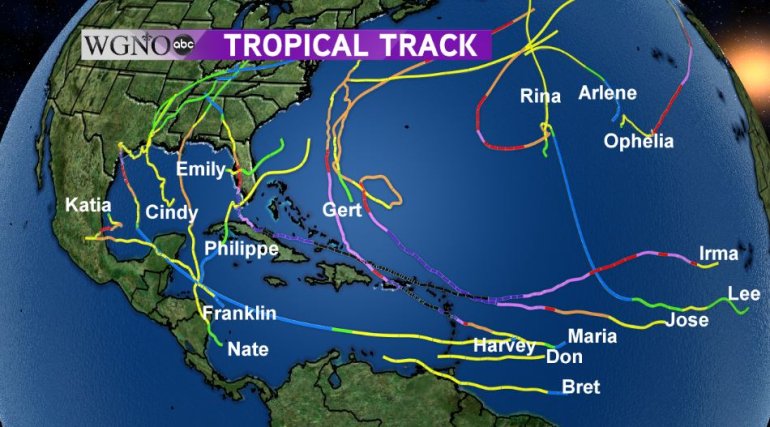 In August, Hurricane Harvey rapidly intensified and brought catastrophic damage to the state of Texas before re-emerging into the Gulf of Mexico. As a much weaker system, Harvey continued to dump torrential rains across Eastern Texas and Western Louisiana and made a second landfall near Cameron, Louisiana.

Jose tracked slightly more north than Irma and brought destruction to the Northern Leeward Islands again before turning north into the Atlantic and circling in the cooler waters off the New England coast before finally turning out to see.

Maria tracked farther south than either Irma or Jose and brought catastrophic destruction to the Central Leeward Islands and the island of Puerto Rico before turning north into the Atlantic.

After Maria, Nate formed in the Caribbean and began to quickly track north, attaining hurricane intensity in the Gulf of Mexico. Nate was an odd storm. Only the eastern side of the storm was fully formed as it made landfall in Mississippi which spared the New Orleans area from the worst of the storm but lashed Coastal Mississippi with a destructive storm surge and damaging winds.

Philippe and Rina wrapped up the season. Philippe was a quick moving tropical storm that brought heavy rains to Cuba and Florida while Rina remained at sea in the Central Atlantic as a tropical storm.

From "Lizard People" to the "New World Order," nine different conspiracy theories are scattered across the country.

AUSTIN (KXAN) — Texas State Trooper Juan Rojas Tovar left the hospital Wednesday, and he won't be alone in his recovery, according to the Texas Department of Public Safety.

A tweet from the law enforcement agency said Tovar "faces many challenges in the days ahead, but he will not be alone; he has the support of a loving family and his brothers and sisters in law enforcement."