NEW ORLEANS (WGNO) -- Jeffrey Sallet took the reins of the FBI in New Orleans as the Special Agent in Charge in November.  He says he wants to be as transparent as possible with the public.

Recently, that included the FBI's announcement that it would be stepping up its use of surveillance cameras along parade routes.

Friday, Sallet took an additional step and invited reporters to get an idea of the life and death decisions agents must make while taking criminals off the streets.

The day began with demonstrations of how similar toy guns look to the real thing.  Perhaps you've heard that the toys generally have a red or orange tip on the barrel, but agents showed reporters that sometimes the colored tips are removed from toys and other times are added to the real thing. 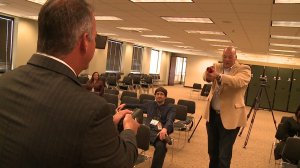 Also, agents talked about the use of deadly force.  They understand that the public might raise an eyebrow upon hearing that a suspect was shot 20 or 30 times.  But agents also played a videotape of a man who continued to fire at agents during a gunfight until he'd been hit 30 times by the return gunfire.

Then agents talked about blood loss from gunshot wounds.  They say a suspect who is shot more than 30 times may only have four or five injuries that eventually stopped them.  Also, agents say an average person has ten pints of blood in their body and can stay conscious until about half of it is lost.

Finally, agents put reporters to the test with a shoot-don't shoot exercise.  John Huber, the leader of the bureau's tactical team, put reporters through the paces.  Agents used various scenarios that showed how they must make split-second decisions to save lives, opting to shoot -- or not.

To see the shoot-don't shoot examples, click on the video button above.

SHREVEPORT, La. (KTAL/KMSS) – Shreveport rapper Hurricane Chris, also known as Christopher Jerron Dooley, has been indicted in connection with a fatal shooting outside a Hollywood Avenue convenience store in June.

Dooley, 31, was indicted by a Caddo Parish grand jury Thursday on a charge of second-degree murder in connection with the slaying of 32-year-old Danzeria Ferris Jr., who was shot several times at a Texaco station at Hearne at Hollywood avenues early on the morning of June 19. Dooley was arrested later the same day. According to the Caddo Parish District Attorney's Office, he also is charged with illegal possession of a stolen 2016 Mercedes sedan, which was one of the elements associated with the slaying.

NEW ORLEANS - On October 22, District Attorney Leon Cannizzaro's office announced it secured a murder indictment against a man accused of fatally shooting another man at a New Orleans East playground.

The shooting happened back in August.

NEW ORLEANS-- The 4 candidates vying to be the city's top prosecutor include longtime political operatives, and one person who's actually held the job before.

After clashing several times with current District Attorney Leon Cannizaro, Councilman-at-Large Jason Williams made it clear early on that he intended to run. He was then indicted for federal tax evasion, which he denies, but he says that recent events in the country and our city dictate that he's the man for the DA's job.

Tijuana says no to private gatherings on Halloween, Day of the Dead

Target to offer shopping reservations to beat the holiday crowds

Tijuana says no to private gatherings on Halloween, Day of the Dead