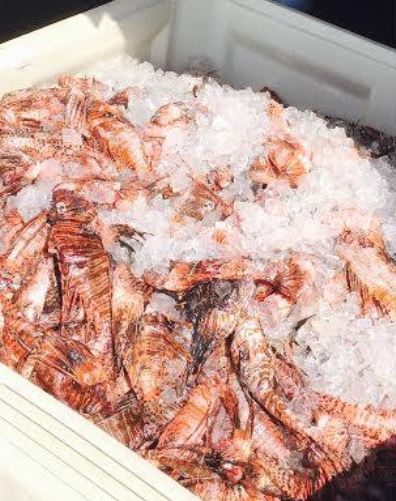 (CNN) — Few predators can match the devastating impact of the lionfish. Since arriving in US waters in the 1980s, these fearsome creatures have left a trail of destruction along the Atlantic Coast, from Rhode Island to Venezuela. Lionfish can reduce a flourishing coral reef to barren wasteland in a matter of weeks. Native fish, unfamiliar with the new arrival, do not know to avoid it, and the predator gorges to the point of obesity. As so-called “apex predators” they sit at the top of the food chain, unthreatened by any other creature. They breed rapidly, and are extremely resilient and adaptable. No solution has been found to control their advance yet, but conservationists could soon have a new tool at their disposal: killer robots.

The idea emerged from a diving trip in Bermuda, where iRobot CEO Colin Angle met with local conservationists, and learned about the extent of the damage caused by lionfish. One of the group suggested that he create a machine to kill the fish, and another offered to provide funding. Angle returned home and wrote a proposal, which swiftly became the non-profit company “Robots in Service of the Environment (RISE).” The design for a lionfish killer combines a remotely-operated vehicle (ROV), using technology which iRobot had developed for the automatic vacuum cleaner Roomba, with a bespoke electrocution device.

“Think of it as a video game,” says RISE Executive Director John Rizzi.

“It will be a tethered device with a control mechanism that you drop into the water,” he says. “You drive the ROV until you see the fish — a lot of the technology is in the cameras — then you drive the ROV onto the fish and press the trigger.”

In tests, the lionfish have shown no fear when twin electrodes are lined up alongside them, ahead of administering the fatal shock. The fish is then sucked into the ROV and returned to the hunter. The mechanism is simple and effective, but design challenges are ongoing.

“We’re chasing a million lionfish,” says Rizzi. “We need thousands of devices and they need to be reliable, inexpensive, and safe.”

With consumer-level pricing, RISE aims to make the robots available to any diver or fisherman, and to build a market.

“By getting the economics right, we will give people the incentive to buy our device and kill some fish, sell them or eat them, and do it again,” says Rizzi. “The best way to eliminate a species is if humans eat it.”

Beyond price issues, there is also a fear that the robots could target the wrong fish, but RISE is developing recognition software that will only allow them to kill lionfish.

Various ideas have already been tried to control lionfish numbers, from training sharks to eat them, to using them for jewelry.

Spear fishing derbies have had some local success in reducing populations, but there is recognition from conservationists that larger scale solutions are required.

“Currently there isn’t an effective way to conduct mass culling,” says Chris Flook of the Department of Environment and Natural Resources in Bermuda. “We have spear fishers with special permits that catch lionfish on shallow reefs but lionfish survive at depths beyond the reach of recreational divers.”

The machines could play a critical role in restoring the health of marine ecosystems, according to Dr. Gretchen Goodbody-Gringley of the Bermuda Institute of Ocean Sciences.

“If the robot is successful it could have a major impact on our ability to manage the invasive lionfish population,” she says. “By controlling lionfish densities we can mitigate the negative impacts that these fish have on the biodiversity and health of our coral reef ecosystems.”

There is also support for using robots from government agencies.

“It’s a step in the right direction and using robotics for controlling lionfish is something we have had on our radar for a while,” says Alex Bogdanoff, a marine biologist at the National Oceanic and Atmospheric Administration (NOAA).

Bogdanoff adds that technology cannot solve the problem alone, but could be effective as part of a package of control measures including divers, traps, and public education. He believes that creating a market for lionfish as food is critical.

“Getting this fish on people’s plates as a meal — that’s where I see the biggest bang for our buck,” he says.

The biologist does not believe there is an ethical problem with harvesting the invasive species if the process is humane.

“The ethical issue is around the importation, sale and transport of exotic species to areas they don’t belong,” he says.

Prototypes of the robot are undergoing tests to assess how many fish can be killed, power requirements, and variations of the design. The trials will continue for the next year, before the first commercial models are assembled and sent out to hunt. Rizzi says the company is fully focused on the lionfish project, but similar designs could be used to cull other nuisance species in future.

“Our first notion is to go after lionfish, but we see ourselves building an organization that will apply robotic technology to other environmental disasters,” he says. “All kinds of ideas are coming in.”