NEW ORLEANS (WGNO) -– A new poll released today finds that New Orleans voters overwhelmingly approve of the law prohibiting smoking inside all workplaces, including bars and casinos, after six months in effect. The poll indicates that support for the law has increased as NOLA residents have experienced the benefits of a smoke-free environment.

Nearly 8 out of 10 New Orleans voters support the new law, including 64 percent who strongly favor it. Support for the law has increased from 66 percent in December 2014 to 78 percent today. 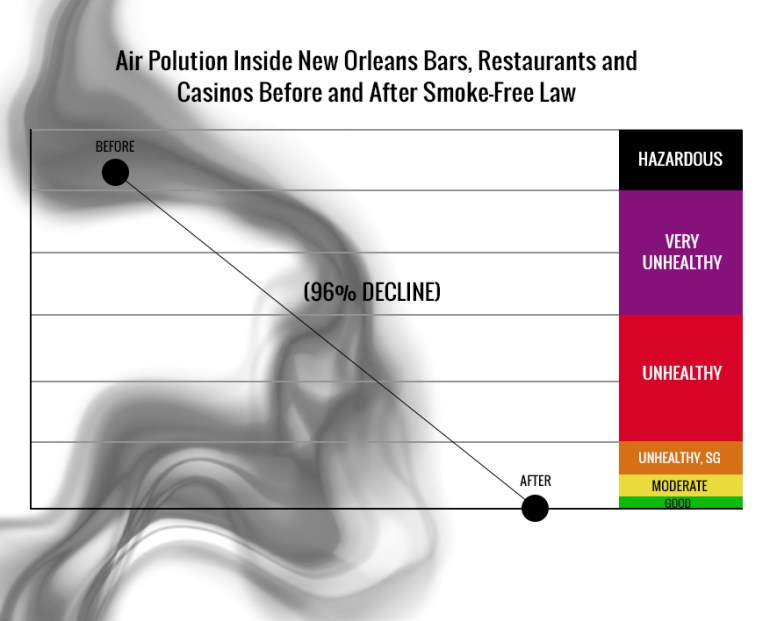 These poll results come on the heels of a recent study finding indoor air pollution levels having fallen dramatically in bars and the city’s casino since the smoke-free law took effect. The level of fine particle air pollution fell by 96 percent in venues that had previously allowed smoking, and it was virtually eliminated in the casino, where there was a 99 percent reduction.

The New Orleans City Council unanimously (7-0) passed the ordinance sponsored by Councilmembers LaToya Cantrell and Susan Guidry on January 22. Mayor Mitch Landrieu signed the measure into law a week later with the law going into effect on April 22.

Among the other poll findings:

The citywide survey of 500 registered voters was conducted by Public Opinion Strategies and released today by the SmokeFree NOLA coalition. The poll was funded by the Robert Wood Johnson Foundation.

The air quality study was conducted by nationally recognized indoor air quality researchers at the Roswell Park Cancer Institute in Buffalo, New York, using state-of-the-art air pollution monitors to measure the levels of fine particle air pollution in 13 bars and one casino both before and after the smoke-free law took effect.

That study concluded that New Orleans’ smoke-free ordinance is protecting the health of New Orleans workers, entertainers, residents and visitors: “This study demonstrates that employees and patrons in New Orleans bars and casinos are currently not exposed to hazardous levels of air pollution resulting from indoor smoking. New Orleans’s smoke-free air ordinance … is a proven means to significantly reduce exposure to toxic tobacco smoke pollution, which will improve quality of life and health outcomes for New Orleans workers, entertainers, residents and visitors.”

CHALMETTE, LA. -- Despite coronavirus restrictions, folks in St. Bernard Parish did their part to support their favorite small shops this weekend.

"During the pandemic, it's really important to support local. They've struggled, you know, with being closed down and we don't want to see our shops disappear," said shopper Shannon Nevels.

NEW ORLEANS, LOUISIANA-- In the 1980's it was the golden age of shopping malls and retail across the United States and merchants began a tradition in the true spirit of American Business. Black Friday was a way to use one day to turn a profit for the year. It became the biggest shopping day in the country.

Over recent years, a recession and the growth of online shopping changed the retail landscape. This year, local businesses have been hit hard because of the economic effects of COVID-19 and it makes Black Friday and Local Business Saturday all the more important for the livelihood of business owners and the local economy.

And this time of year, believe it or not, Bourbon Street becomes Gratitude Boulevard.