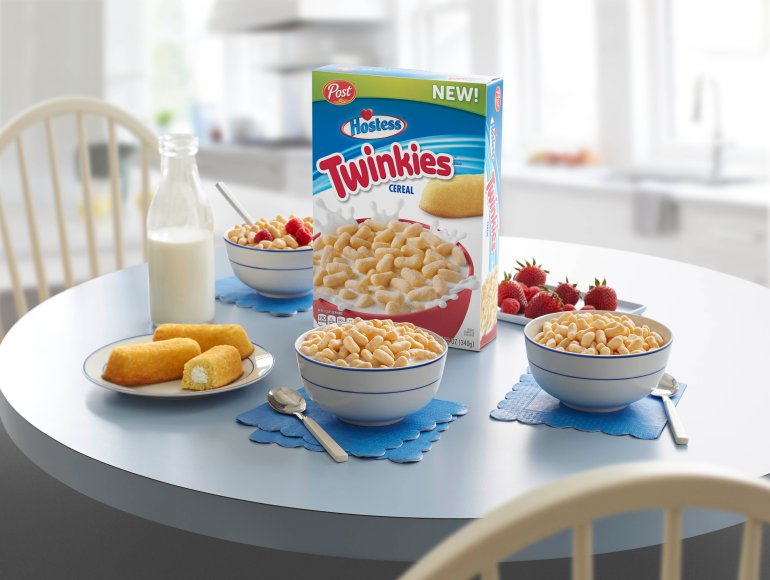 WGNO — Post is turning Twinkies into a breakfast cereal. Walmart is letting potential customers that the cereal will be on its shelves next month.

If you’re not into sweets for breakfast, Twinkie Cereal probably isn’t for you.  A news release announcing the new cereal reads, “Dessert for breakfast?  There’s literally nothing sweeter.”

In 2012, the future of the original Twinkies treat was in jeopardy.  The company that made them, Hostess, declared bankruptcy and the Twinkie run came to a brief end before a buyer took over production of the cream filled cakes.

We’re told that the new, crunchy pieces of cereal include the cream flavor that helped make Twinkies a favorite treat for decades.

That’s not the only big announcement for Walmart.  The retail giant says it is also bringing back Kellog’s Eggo Cereal in two flavors, Blueberry and Maple Flavored Homestyle.  The Eggo will be available sometime after Christmas for $3.64 a box.

NEW YORK (AP) — Amazon is rolling out pay-by-palm technology at some Whole Foods grocery stores near its headquarters to make paying quicker and more convenient.

The technology, called Amazon One, lets shoppers scan the palm of their hand and connect it to a credit card or Amazon account. After the initial set up, which Amazon says takes less than a minute, shoppers can scan their hand at the register to pay for groceries without having to open their wallets.

WEST MONROE, La. (KARD/KTVE) — Within the next three months, McDonald’s restaurants across Louisiana are planning to hire a whopping 4,361 employees.

(NEXSTAR) — Customers at select Walmart locations throughout the U.S. will soon be able to partake in some “famous” fast-food fare.

Nathan’s Famous, the restaurant chain known for its hot dogs, crinkle-cut fries and annual eating contest, has announced a partnership with Ghost Kitchen Brands to bring its menu to 60 “non-traditional” locations by the end of the year, many of which will operate inside Walmart stores.

Man survives plunge off cliff after SUV crashes through rail, lands in ocean