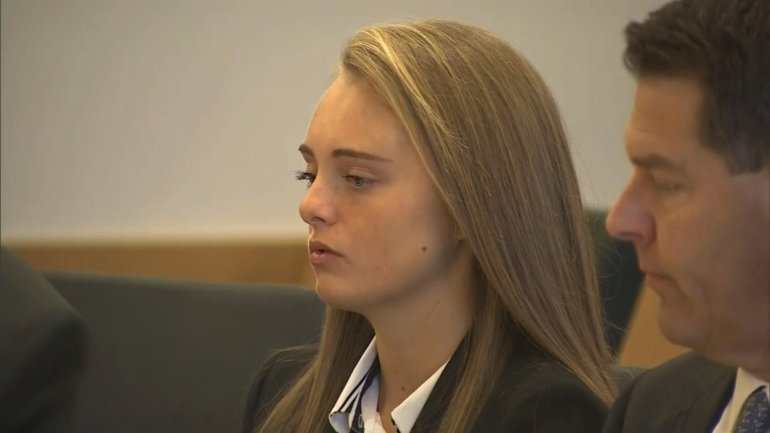 A woman serving a 15-month sentence for her part in her boyfriend’s death by suicide will leave jail weeks early even after her bid for parole was denied this week by Massachusetts officials, according to a sheriff’s spokesman and a state record.

Michelle Carter has earned “good time” that will move up her release to March 13 from May 5, Bristol County Sheriff’s Office spokesman Jonathan Darling told CNN Friday in a statement. Inmates can earn as many as 10 days monthly for working at the jail and attending educational and other programs, he said.

Meantime, Carter’s appeal Thursday to be released after serving about half her sentence was denied by a two-member state parole board, according to a record of the decision provided by the Executive Office of Public Safety and Security in Massachusetts.

“The (Board) is troubled that Ms. Carter not only encouraged Mr. Conrad (Roy III) to take his own life, she actively prevented others from intervening in his suicide. Ms. Carter’s self-serving statements and behavior, leading up to and after his suicide, appear to be irrational and lacked sincerity,” the board’s decision states.

“Given subject’s behavior in facilitating victim’s death, release not compatible w(ith) best interest of society,” one board member wrote. “Did not provide sufficient insight into reason for lack of empathy at time of crime and surrounding time period.”

Carter’s attorney did not immediately respond to CNN’s request for comment.

Carter was found guilty in 2017 of involuntary manslaughter in the death three years earlier of Roy, who was 18 when he killed himself in his car. After his death, investigators discovered Roy had texted Carter as he contemplated and attempted suicide, and that she’d encouraged him to do it when he had doubts.

COLUMBUS (WCMH) -- Nationwide announced Thursday it would eliminate 250 positions across the country.

The layoffs will affect employees in the property and casualty claims, service and operations roles.

The incident began about 10 p.m. in the 3600 block of West Avenue when officers responded to a family disturbance call, the Fullerton Police Department stated in a news release.

NEW ORLEANS - The NOPD is investigating a homicide that occurred in the Fifth District.

At around 2:43 p.m. on May 28, NOPD Fifth District officers responded to a call of aggravated battery by shooting in the 2300 block of North Galvez. Upon arrival, officers found an adult male suffering with multiple gunshot wounds. The victim was pronounced dead at the scene.

Pelosi on George Floyd death: ‘We saw a murder’