NEW ORLEANS (WGNO) – Hurricane Matthew may be no more, but as residents in the Caribbean, Bahamas and Southeastern U.S. continuing to piece back their lives, meteorologists are looking back at Matthew’s historic tropical life.

Matthew’s origin is humble, as are all hurricane’s, emerging off the coast of Africa as a tropical wave on September 22. Designated Invest 97-L (unlike a named tropical system, invest numbers are between 90 and 99 with a suffix of -L for the Atlantic basin and are reused in a single season if needed), the wave continued to move across the Atlantic Ocean. 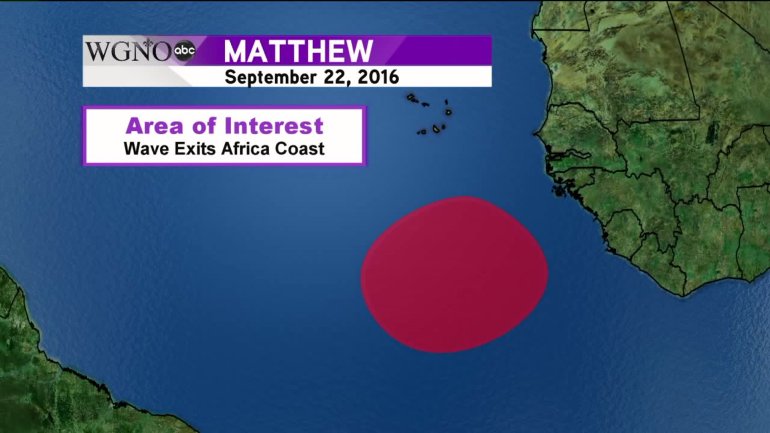 By September 28, the wave had obtained a closed circulation and since winds were above the threshold for a tropical storm, Matthew was born just prior to reaching the Lesser Antilles. Tropical Storm Matthew continued across the islands and into the Caribbean Sea where rapid intensification would occur.

Even with the presence of moderate wind-shear, Matthew would reach hurricane status the next day, September 29. The intensification was remarkable. In only 24 hours, Matthew would go from a category 1 hurricane to a category 5. It’s the third fastest intensification of a tropical system in the Atlantic Basin, behind only Wilma (2005) and Felix (2007). Matthew’s winds increased 90 mph in 30 hours and was the first category 5 storm since Felix in 2007. Another unusual trait of Matthew is that it was also the southernmost category 5 in the Atlantic Basin. 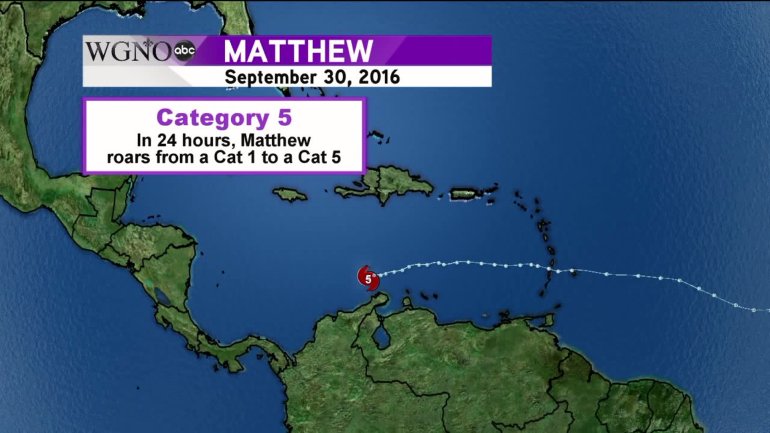 Matthew would only briefly attain the status of a category 5, the majority of its time in the Caribbean would be as a category 4 hurricane. By October 2, Matthew’s forecast turn to the north finally happened and the dangerous storm set its sights on the impoverished nation of Haiti, who was still reeling from the catastrophic earthquake and ensuing cholera outbreak in 2010. Matthew made landfall on October 4 near Les Anglais on the Tiburan Peninsula. In its wake, Matthew would leave over 1,000 people dead in Haiti alone. Haiti had not been affected by a hurricane this strong since Cleo in 1964

Shortly thereafter, Matthew would make its second landfall, this time near Jauco, Cuba. The mountainous region of Eastern Cuba left its mark on the hurricane. Matthew would emerge from the island nation as a category three storm and continued its northward journey into the Bahamas. In fact, Matthew would be the first known hurricane to affect Haiti, Cuba and the Bahamas, all because of its unusual northward path through the Caribbean.

As residents of the Southeastern U.S. coast evacuated their homes and fled inland, the category four Matthew would continue its march northward and eventually turn northwest, paralleling the Florida Atlantic coast. Thankfully the eye would stay offshore, and so would the strongest winds, but hurricane force winds were still felt up and down the coast of the Florida Peninsula. Matthew would be the strongest hurricane since to 1898 to affect the Northeast Florida coast. 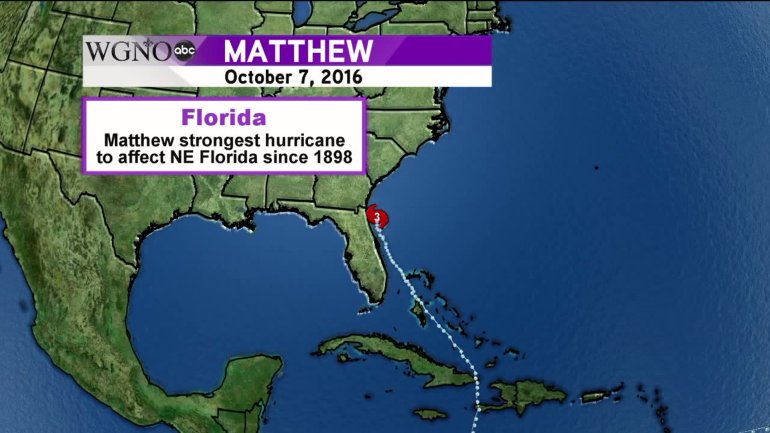 Beyond Florida, flooding and torrential rains were felt in Georgia and South Carolina. The coastlines curved path to the northeast brought a new worry, a storm surge. Even though Matthew had technically stayed offshore, the now category two hurricane was pushing its the surge to the north and into cities such as Charleston, SC. Matthew would turn to the northeast, still continuing to parallel the coast bringing it flooding into North Carolina as well. Matthew’s third and final landfall occurred on October 9 near McClellanville, SC. This is the first time a hurricane has made landfall north of Georgia since Hazel in 1954.

Matthew wouldn’t stay onshore for long and eventually moved back out into the Atlantic and rapidly lost its tropical characteristics the next day on October 9. By then, the damage was done. The preliminary estimates of Matthew’s path of destruction are $5-7 billion ($4-6 billion in the United States alone). In its wake, over 1,000 people died, the overwhelming majority in Haiti where fears of another cholera outbreak are growing. This makes Matthew the deadliest hurricane since Stan in 2005. 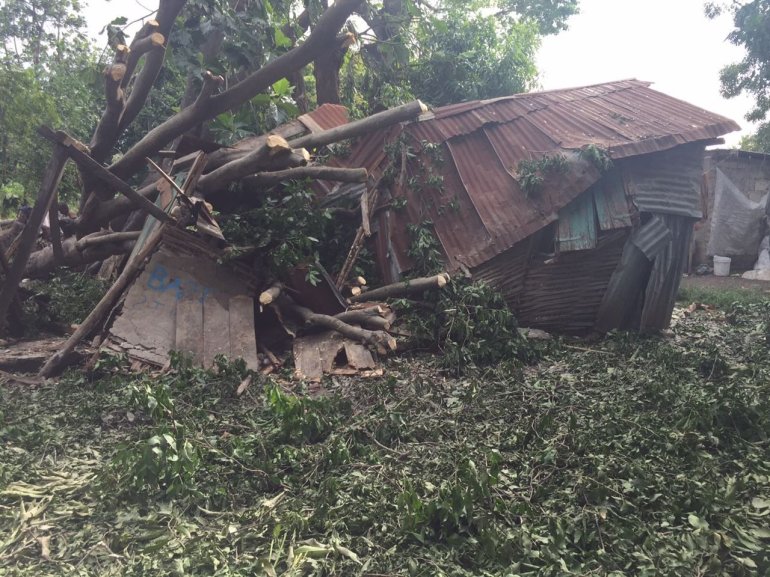 Overall Matthew is the longest lived Category 4-5 storm since record keeping of hurricanes began. 102 hours of this time was consecutive giving Matthew the distinction of having the longest streak of category 4-5 winds for the month of October for the Atlantic Basin. As for how Matthew compares to the rest of the 2016 Hurricane Season: Matthew sustained hurricane force winds longer than all other hurricanes this season combined.