NEW ORLEANS – There’s only 35 days until Mardi Gras day and krewes are preparing their goodies to toss from the float!

Carnival season is here and two special and local organizations are teaming together so they can package some pretty creative Mardi Gras throws here at Mardi Gras Recycle Center!

Over 400,000 pounds of recycled beads are collected per year by the ArcGNO organization.

They start collecting and sorting recycled throws throughout the city right after Ash Wednesday.

“It helps the environment. Like, we don’t have to worry about our drainage system. To be able to help our community, I think that’s important.”

The second organization is a nonprofit called Grounds Krewe and that’s ran by Brett Davis whose providing consumable foods for people to throw during the parade!

“I wanted to find something that people could use on the route when they caught it” Director of Grounds Krewe, Brett Davis shared.

Brett created 4 by 6 packs of Louisiana dark roast, red beans and jambalaya. The AchGNO members wrap them in fiber sacks from India! Then, he sales them to individual riders to throw for under $2!

All of his products are biodegradable! So if they end up on the streets, it won’t hurt the environment.

You can purchase these items at the Mardi Gras recycling center at 925 S Labarre Road! 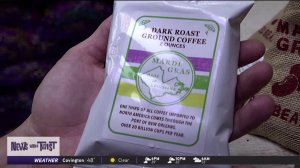