News with a Twist Reporter Kenny Lopez takes a look at the “What Lifts You” mural which has become a sensation with the help of pop star, Taylor Swift.

What Lifts You?   This new art installation in downtown NOLA is asking the question.

“Music lifts me.  It inspires me, and it feeds my soul,”  Ashlyn Blanchard said.

“My wife and three girls lift me,”  Jonathan Hamilton said.

This art piece is getting folks to talk about what lifts them up.  It’s impossible to not feel happy while looking at Kelsey Montague’s art piece, which allows folks to become the centerpiece in this art piece.  Montague is a Denver-based artist who paints these heavenly looking wings all over the world.  Her heavenly wings are a worldwide sensation appearing everywhere from New Zealand to New York, where it all began with a little help from a mega-Pop star, Miss Taylor Swift. 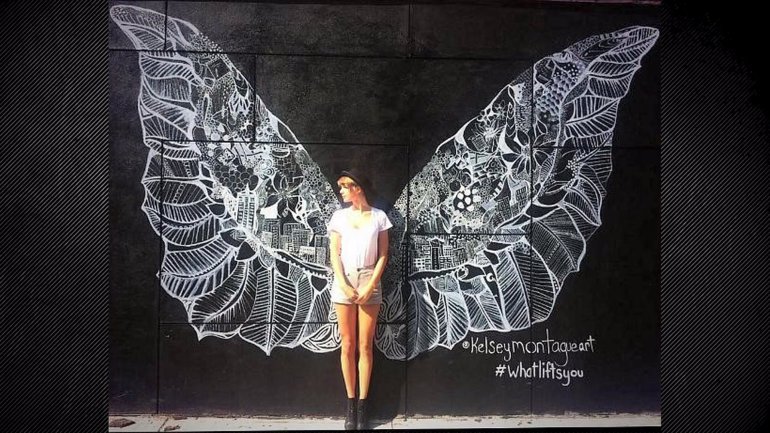 “Kelsey started with her first set of wings in New york and completely unbeknownst to her, Taylor Swift was in town.  Taylor got out of her car, took a picture in front of the weeks and then put it out on Twitter and Instagram for the world to see.  Kelsey became an internet sensation overnight,”  Cameron Shaw with Pelican Bomb, said.

Pelican Bomb is a contemporary arts organization which partnered with the Downtown Development District to bring “What Lifts You” to New Orleans.

In each city, the wings look different.  The artist tailors the wings to fit the spirit of the city.

“When Kelsey first visited New Orleans she was lonely one day and decided to go to a bar.  She drank bourbon punch, and the bartender took good care of her.  She felt so loved here in New Orleans, and she wanted to bring that symbol, the wings to NOLA,”  Shaw said.

Folks can’t seem to get enough of this positive and uplifting masterpiece.

“I think what people love about this is the message is positive.  It’s a simple gesture, but a powerful platform. It really is a beautiful thing,”  Shaw said.

The “What Lifts You” mural is located at 750 Carondelet Street near Julia Street.

Man arrested for child abuse after two-year-old is …

Funeral arrangements set for both victims of Covington …

Man arrested for child abuse after two-year-old is …