New Orleans - New Orleans EMS is leading the nation, by hiring an LGBT liaison for their services.

26-year-old T.J. Boyd has only been in his new position for about a month, but he is teaching paramedics and other emergency medical technicians how to interact with the LGBT community.

"We treat people off their injuries, not off their sexual orientation," says Boyd who has worked as an EMT since 2010.

He's been working for New Orleans EMS since 2016. 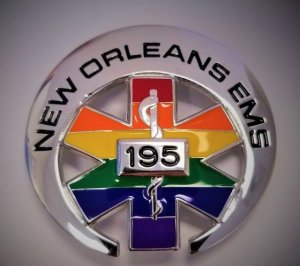 bracing how our people live, and the values that they carry. We want to make sure as a city, we stand firm on no matter who you are, or who you love, you matter," says New Orleans Mayor LaToya Cantrell.

New Orleans EMS is rolling up in this year's Pride parade decked out in all of the colors of the rainbow.

Even representing transgender folks in the city.

T.J. designed the decal on the truck that will be in the parade, and the emblem on the ambulances.

They will stay that way for the month of June.

"It means a lot to me, because we can show our pride, and be open about who we are," Boyd says.

The money for the decals was not taken from tax payers.

The LGBT community raised the money on their own.

"I thought that was awesome! It gives me chill bumps," Boyd says.

Mayor Cantrell followed with, "It's organic. It's coming from the people. It's what government is about in my opinion. It's listening to what your folks want and then finding a way to make it happen. Because, you're embracing all people. Not just with words, but with action."

When Pride month comes to an end, T.J. will continue to work, educating his coworkers.

Other cities have taken notice and are wanting to follow in New Orleans' footsteps.

METAIRIE, La - It's rolling across Metairie.