UPDATE:  Now a year later, Ally Burguieres has written a letter to Taylor Swift in hopes she finally can get recognition for her work.   Read the letter below: 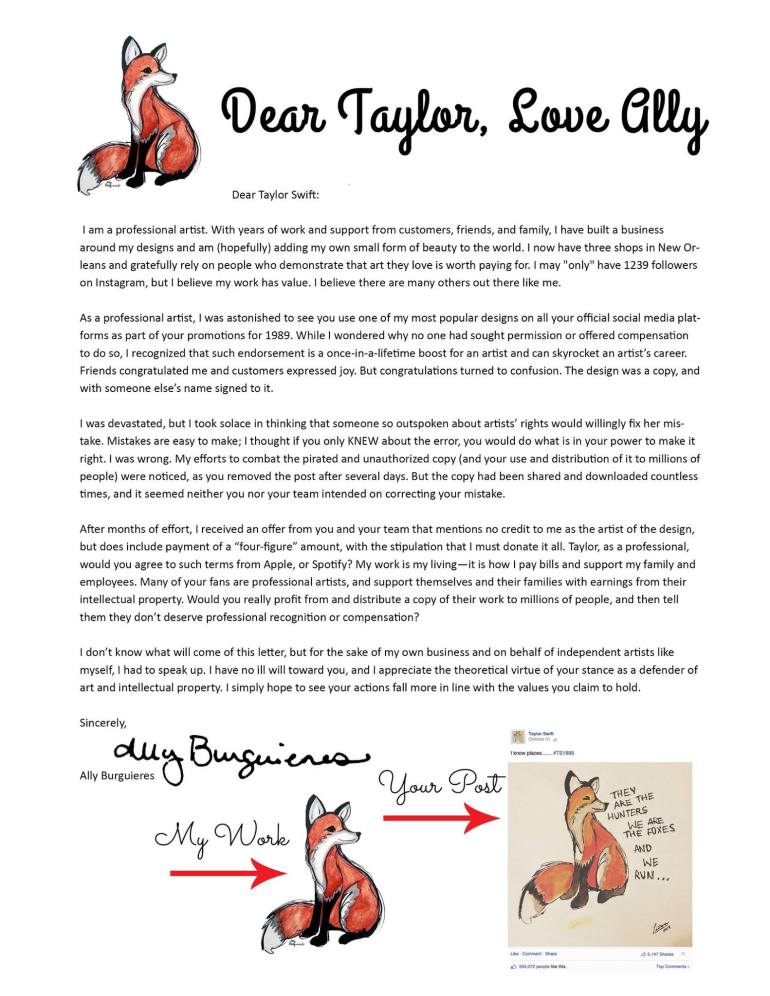 NEW ORLEANS (WGNO) - Taylor Swift is America's singing sweetheart, right? So why would a local artist be frustrated with something Swift put up on social media? News with a Twist Reporter, Kenny Lopez found out!

Ally Burguieres of Gallery Burguieres designed a fox in 2013.  Now her fox is becoming famous, but not in the way she intended.

"A girl from New Orleans copied my work.  She used my fox but took off the crown.  She used the fox on the logo for my boutique shop, "Cocoally" and then she wrote, "They are the hunters...we are the foxes...and we run.  It's a line from "I Know Places", a Taylor Swift song,"  Burguieres said. 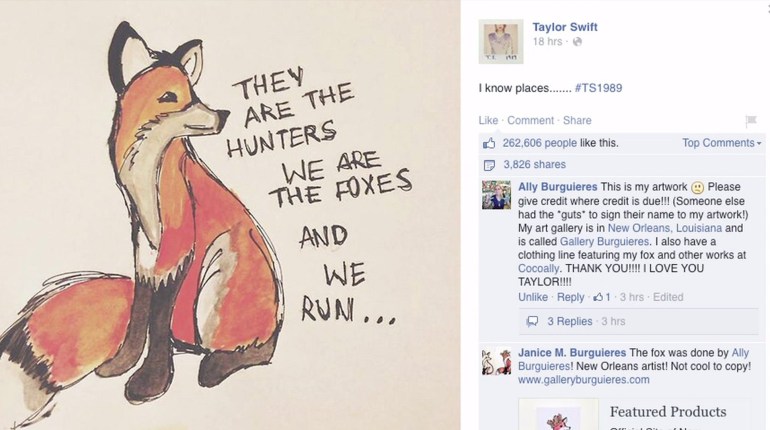 Something which makes Burguieres "Red" with frustration is the fact that it's her artwork and she's not getting the credit. "My image has gone viral with someone else's name on it with me getting no credit at all."

She prefers not to name the girl who copied her artwork because she apologized and claims she didn't realize she did anything wrong.

"A lot of people don't understand that you can't copy someone's design and use it as your own,"  Burguieres said.

Ally doesn't plan on taking legal action against anyone.  The pop star's social media team even took down the post.

Burguieres knows that Swift is an advocate for artist rights.  Recently, Swift announced she'd be pulling her music from Spotify, taking a stand over music royalties.

"I would like some acknowledgment from Swift that she truly does believe that artists have rights and that art shouldn't be free without consent," Burguieres said.

The feeling of copyright violations isn't something this artist will be able to just "shake it off".

"No art should be shared for free without pay, credit or permission."

Taylor Swift is up for Female Vocalist of the Year at tonight's Country Music Awards.

If you'd like to check out Burguieres artwork, her gallery is at 736 Royal Street.

NEW ORLEANS-- A local photographer helped unemployed people in a big way today by taking free professional headshots for them.

METAIRIE, La.-- There's a mysterious case of laundry and clothes going missing in Metairie on Oaklawn Drive. The culprit has four-legs and is known as the "Cat Burglar."

"My cat is a kleptomaniac and he keeps taking the neighbor's stuff," Heather Bardi, cat owner said.

Herman Cain is mourned, celebrated at his funeral in Atlanta

Will Smith posts an emotional tribute to his oldest son