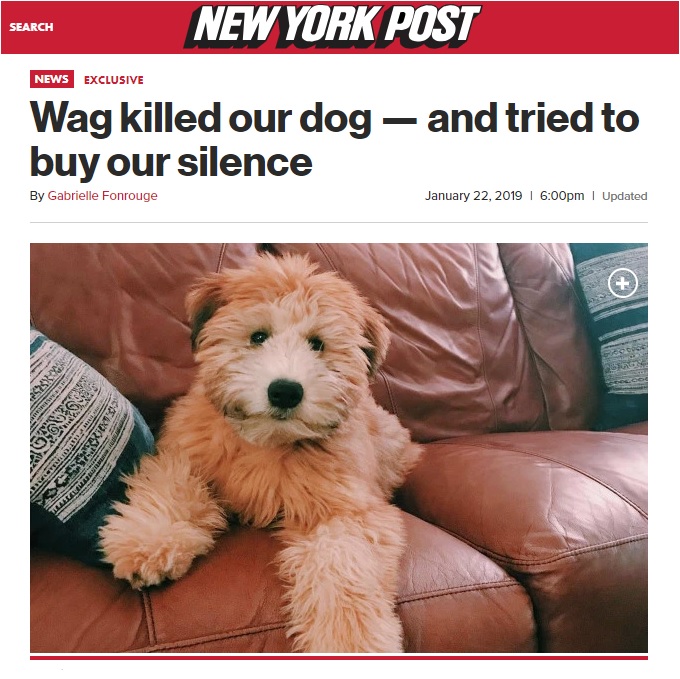 NEW ORLEANS — Sara and Nick Moore of Houston are heartbroken. They spoke to Gabrielle Fonrouge of The New York Post about the death of their purebred Wheaten terrier, Winnie, at the hands of a professional dog walker employed by the Wag! app.

The New York Post reports that the dog-walking service is accused of losing or killing eight dogs in NYC.

The couple regularly used the “Uber for dog walking” app but on December 10th, Winnie lost her life.

After the 60-minute walk should have been completed, Sara realized she had not received a notification to let her know that Winnie was home safe. So she called to check in. After initially being given false information, Wag! called Sara for an update to discover that her dog had been struck and killed by a car.

After multiple promises to cover all costs, the couple sent Wag! an invoice for $188.71. The cost of Winnie’s cremation. In return, Wag! sent the grieving family a non-disclosure agreement stating that the couple would be paid as long as they promised not to talk negatively about them. The couple refused to sign.

The most disturbing part of the story is discovering that the couple never even received the details of the death. “We were driving around the neighborhood saying what if it was here? … it was traumatizing,” Sara Moore told Gabrielle Fonrouge.

Making this post is difficult, and is a decision that did not come easily. We have given this much thought have decided that if what happened to us had happened to a friend, we would want to know. We feel as though it would be a disservice to our friends, family, and their fury loved ones who use the dog walking service Wag, is considering using it in the future, or know someone who does. ❤️ We have kept information about Winnie to a minimum. The way she passed is not what we will focus on in this post (although very traumatic and we miss her every day), but instead focusing on the way Wag has chosen to handle themselves and treat their customers after the passing of a loved one. We also want to be clear that this post is not out of anger or for sympathy, but only because if this information was out 6 weeks ago, things may be different for us. ❤️ The day that we lost Winnie, she was being walked by a new walker who unfortunately was careless, resulting in Winnie being hit. Having the feeling something was wrong, I reached out to the walker. She assured me that Winnie was at home safe and that Wag would be calling me to follow up. Five minutes later, I received a call telling me that was in fact untrue and she was gone. ❤️ Again, we will not focus on this, but instead the aftermath and how Wag has treated our family. On the phone call, a Wag representative gave me little information. She told me where to find Winnie and assured me that they would cover any expenses we felt necessary (cremation, clay paw print, etc). After sending them our receipts, Wag then chose to send us an e-mail saying that we would only be reimbursed if we signed a settlement agreement essentially stating that we would never tell anyone what happened, not write any negative reviews, nor post anything on social media, completely leaving their company name and walker out of it. We agreed that getting a reimbursement was not worth pretending as though this never happened. Wag then explained this option would be available to us if we ever changed our minds. Not even 24 hours later, we received a notice stating this agreement was no longer valid. ❤️ ***continued in comments

Wag! dog walking services are available in New Orleans and throughout the state of Louisiana.