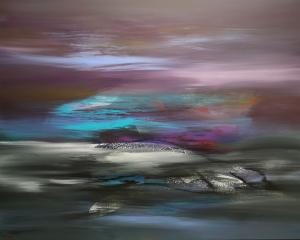 Her Current Focus is on The “Karmic Art Experience,” Combining Soul and Realism. Patricia’s Work Has Been Exhibited in Galleries and Art Fairs Worldwide.

NEW YORK, NEW YORK, USA, January 25, 2023 /EINPresswire.com/ -- ArtTour International Magazine proudly names Patricia Karen Gagic as the Artist of the Year 2023. Renowned international contemporary artist and award-winning author Gagic has honed her skills in the Matisse palette and technique of French Master Dragan Dragic, resulting in her work being described as Transcendental Realism. Her current focus is on the “Karmic Art Experience,” which is combining soul and realism.

Patricia’s work has been exhibited in galleries and art fairs worldwide, including the 13th Street Gallery in Canada, BB International Fine Arts in Switzerland, Authentify Art in Los Angeles, and FACEC in Monaco and Cannes. She began her studies with Dragan Dragic in 1999 in Savoillan, France, and had the honor of exhibiting with him in Sault, France, in 2008. Patricia receives several awards, including the Gold Medal at the SNBA at the Carrousel du Louvre in Paris.

Patricia is also an accomplished entrepreneur with experience in banking and property management. She completed her studies at the University of Toronto in Applied and Transformative Mindfulness. In addition to her artistic pursuits, Gagic is a humanitarian and co-founder of The Reflections Initiative, an organization committed to schools and libraries in Cambodia and Nicaragua. She is also an Ambassador for the Peoples Improvement Organization in Cambodia.

ArtTour International Magazine, a leading multimedia art magazine dedicated to promoting artists worldwide, is celebrating its 12th successful year with releasing a special anniversary issue. This special edition features never-before-published information about the magazine’s history, an exclusive interview with founder and CEO Viviana Puello, and a list of the “Artists to Watch” in 2023.

Since its creation in 2011, ArtTour International Magazine has published over 1,000 features and articles per year, becoming an essential resource for artists and art lovers. The magazine not only showcases talented creators from around the world but also supports art activists and addresses social and environmental issues through its journalism, sharing the voices of ARTivists worldwide.

“I believe in the power of art as a catalyst for social change. This thought inspired me to create ArtTour International eleven years ago. It is the same idea that continues to move me today. Our goal is to help artists share their messages to make a positive impact that will elevate global consciousness. We’re excited to feature Patricia Karen Gagic as our Artist of the Year 2023, her message will inspire our audience and her work will mesmerize them!” ArtTour International Founder Viviana Puello said.

ArtTour International congratulates Patricia Karen Gagic as its Artist of the Year 2023. It looks forward to following her journey as she continues to inspire and bring awareness to the Karmic Revolution through her art.

For inquiries or corrections to Press Releases, please reach out to EIN Presswire.
✕
× Close Ad