In the Ram 1500 Revolution BEV Concept revealed Thursday at CES, Stellantis’ truck brand showed how it plans to deliver an electric pickup in 2024.

Put simply, it plans to carry on the competition that it’s waged against the Ford F-150 family, plus Chevy, GMC, and Toyota full-size trucks, translated into a new era of fully electric trucks.

“At Ram, we’ve redefined what pickup trucks can be and will do so again by pushing past what competitors are offering by delivering the best electric pickups on the market,” said Ram CEO Mike Koval, who added that the brand will “once again redefine the pickup truck segment” with the production version of the full battery electric Ram 1500.

The 1500 Revolution BEV Concept was built on Stellantis’ STLA Frame EV platform. Two electric drive modules are positioned near the front and rear wheels, respectively, maximizing the cabin space and allowing a “cavernous” frunk. The company also says that the Revolution’s smaller and more powerful motors allowed designers to shift the cabin forward, increasing the cabin’s overall length by four inches—bringing more legroom and passenger space while keeping the bed length the same.

The Ram 1500 BEV Concept also embraces powered features, with a charge-port door, tailgate, flush door handles, side steps, and rear step all motorized. There’s also an active diffuser in back.

Those doors open into a more spacious cabin that’s reconfigurable to the needs, whether than be a workspace or adventure. The center console can convert to a workspace, with a mid-gate configuration including a removable lower portion that can be placed inside or outside the vehicle—effectively making the third-row jump seats inside or outside the cabin. 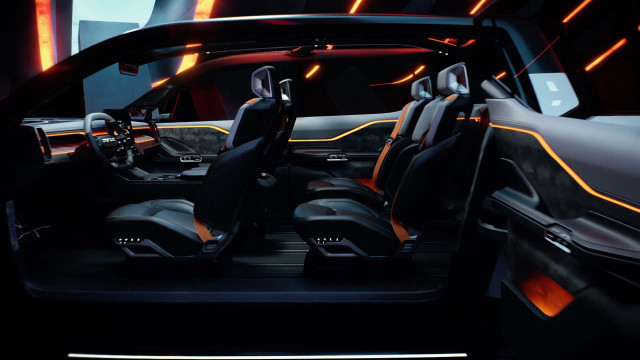 Further, a cargo pass-through allows objects up to 18 feet long. Yes, that means from the bed through a center tunnel of the cabin, all the way through to the frunk.

The charge-port door is located on the driver’s side front quarter panel. The sideview mirrors incorporate a digital camera for the wider view needed for towing, Ram says, yet they’re smaller and save weight for better aerodynamics and lower drag. 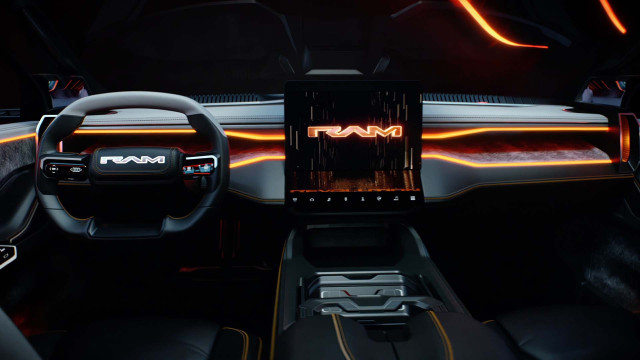 All screens and no buttons inside

Forget the work gloves. There’s really not much continuity with current Ram trucks inside, and the Ram 1500 Revolution BEV Concept aims for a glossy, futuristic look in its interface. It includes a virtually buttonless layout, with removable and reconfigurable tablets and infinitely changeable lighting. Various Cabin modes, such as Productivity, Social, Party, Relax, and user-created modes, use a single button to engage a wide range of cabin features that adjust lighting, seating, “window and skylight opacity,” the suspension, displays, and sounds.

The concept includes a virtual personal assistant that uses a 3D Ram avatar that follows natural-language voice commands, even when the owner is outside the vehicle.

A Shadow mode will allow the vehicle to follow the driver as they walk ahead of the vehicle. That’s useful, Ram says, where the driver needs to move a short distance ahead—for loading tools, for instance, but doesn’t want to get back in the truck.

In an interview with Green Car Reports, chief design officer Ralph Gilles seemed to downplay all that’s packed into the cabin concept, suggesting that it was proof of all the company can do with design and interface but might not necessarily be the production interior. 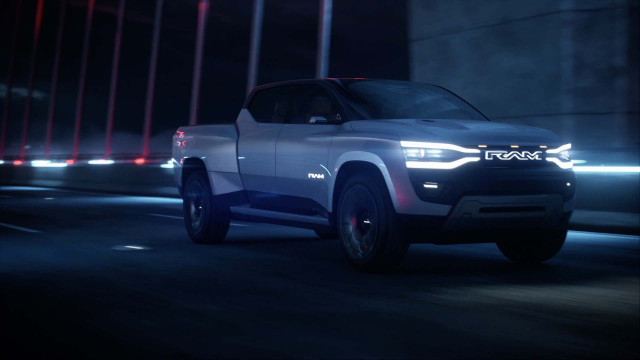 Performance versions on the way—and a PHEV

Ram also laid out that performance electric trucks are part of the plan.

“Designed to accommodate larger capacity EDMs, the Ram 1500 BEV Concept offers the potential for future high-performance applications,” Ram said in the press release. Ram CEO Mike Koval confirmed that the electric Ram will complement the lineup and be offered in a wide range of models, including a work truck and perhaps with off-road muscle to complement or replace the TRX.

The concept, according to Ram, can add up to 100 miles of range in about 10 minutes, on 350-kw CCS DC fast-charging, at 800 volts. Ram hasn’t clarified if this is via two separate 400-volt battery packs, like the GMC Hummer EV, or whether it’s a true 800-volt pack.

Fundamentally, Ram claims the 1500 BEV “will be the leader in a combination of areas customers care about the most: range, towing, payload and charge time.”

It’s important to remember that not all those leading attributes may be flaunted by the same vehicle. A plug-in hybrid Ram is also due and will no doubt be the pick for those looking to drive electric most days but also have long-range rowing ability. But it might not look like the Ram BEV.

This remains just a concept, so stay tuned for production specs and details. Ram says that the production model will follow in 2024 and will be revealed “in the coming months.”

House GOP seeks new restrictions on use of US oil …

House GOP seeks new restrictions on use of US oil …

SHREVEPORT: Give blood and get a Mardi Gras king …

SHREVEPORT: Give blood and get a Mardi Gras king …

krewedelusion must roll on first Sunday in February …